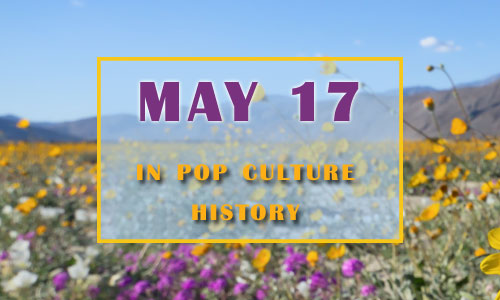 May 17 in Pop Culture History

1536 – The annulment of Henry VIII and Anne Boleyn’s marriage.

1954 – The US Supreme Court handed down an unanimous decision in Brown v. Board of Education of Topeka, ruling that racial segregation in public educational facilities was unconstitutional.

1955 – Nathan Kline, appeared before the U.S. Congress to explain his work with Reserpine, an early antihypertensive/ antipsychotic psychopharmacology drug.

1965 – Written in 1955, the FBI Laboratory, after a formal investigation that began in 1964, declared the lyrics of Louie Louie to be officially ‘Unintelligible at any speed.’

1970 – Thor Heyerdahl and a multinational crew set out from Morocco across the Atlantic Ocean in Ra II in 57 days.

2004 – The first legal same-sex marriages in the US were performed in the state of Massachusetts.