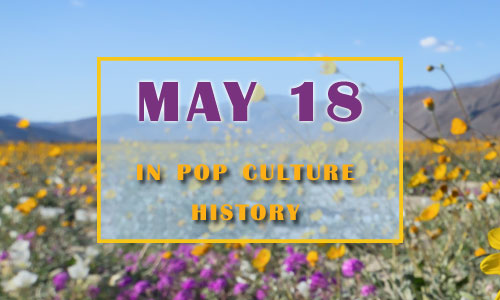 May 18 in Pop Culture History

1910 – The Earth passes through the tail of Halley’s Comet.

1926 – In one of the first Media Frenzy’s of Popular Culture, Evangelist Aimee Semple McPherson disappeared while visiting a Venice, California beach.

1946 – A UFO, with living creatures inside, was reported by Gosta Carlsson, in Sweden.

1952 – Professor Willard F. Libby determined the age of Stonehenge on Salisbury Plain, England, at 1848 BC, give or take 275 years.

1958 – Team Lotus made its Formula One debut in the Monaco Grand Prix.

1980 (Volcano Eruption) Mount St. Helens in Washington erupted with a 5.1 magnitude, causing a massive avalanche and killed 57 people. David Johnson was a volcanologist studying Mt. St. Helens from 6 miles away when it erupted. He made a transmission stating: “Vancouver! Vancouver! This is it!” as the volcano erupted. The transmission went dead at this point, and his body was never recovered.

2001 – Based on William Steig’s 1990 children’s book, Shrek was released in movie theaters.