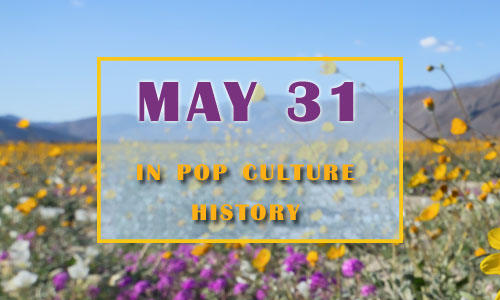 May 31 in Pop Culture History
1279 BC – Ramesses II became pharaoh of Ancient Egypt. He may have been the pharaoh involved with Moses. He was the subject of Percy Bysshe Shelly’s Ozymandias. “King of Kings am I, Osymandias. If anyone would know how great I am and where I lie, let him surpass one of my works.”

1578 – The Catacombs of Rome were discovered.

1927 – The last Ford Model T rolls off the assembly line after a production run of 15,007,003 vehicles. Henry took the last one home, to be with the first one and the prototype.

1977 – The Sex Pistol’s God Save The Queen was banned from performing on the BBC.

1997 – Singer/songwriter Jeff Buckley drowned while swimming in his pool. He was not 27.