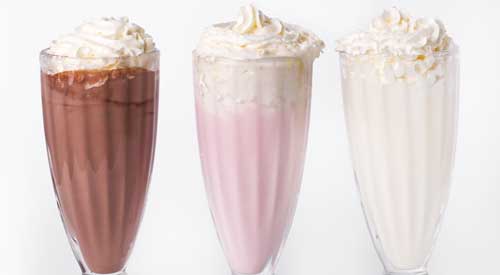 The basic ingredients for a milkshake include milk, ice cream, and flavoring. Bandleader Fred Waring financed the invention by Frederick Jacob Osius, and later marketed the Miracle Mixer and Waring Blendor (note the spelling) in 1937, making milkshakes available in many homes, in addition to medical research. They sold for under $30.

Hamilton Beach made the blender of choice for most professional food establishments beginning with the ‘Cyclone Blender’ in 1911. Prior to that, they were literally “shaked.”

When ‘milkshakes’ were first invented in 1885, they also included whiskey. Initial descriptions of the drink was a “sturdy, healthful eggnog type of drink, with eggs, whiskey, etc., served as a tonic as well as a treat.”|

Ice cream was added in the early 1900s, and the term “Frosted” came about in the 1930s, when more efficient refrigeration made ice cream available on a massive scale.

Walgreens’ Ivar Coulson is noted as the first person to combine the malt, ice cream and flavoring for the modern milkshake.

Use a Frosted Malt Can
1 1/2 oz. Chocolate Syrup
3  #16 Dips of Vanilla Ice Cream
5 1/2 oz. of Cold Milk
Add Malt Powder (One Heaping Tablespoonful)
Place On Mixer Only Until Mixed (Do Not Over Mix)
Use a Generous Portion of Whipped Topping In A #1808 10 oz. Glass
Pour Malted Milk in Glass Approximately 2/3 Full
Serve Remainder Of Malted In A Shaker Along With The Glass To The Guest With Straws and Package of Fountain Treat Cookies