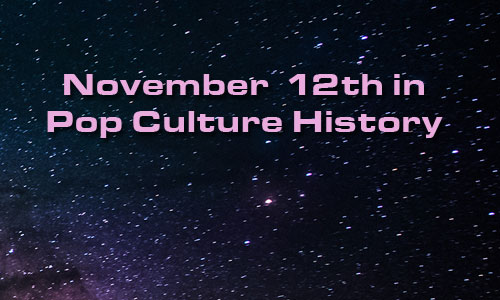 1799 – Andrew Ellicott wrote the about first known record of a meteor shower observed in the US. We now know they were the Leonids.

1847 – Sir James Young Simpson, the father of modern anesthetics, used chloroform (“perchloride of formyle”) for the first time as an anesthetic in an operation.

1892 – William “Pudge” Walter Heffelfinger was the first professional (paid) US Football player. He got $25 and a $500 bonus for a single game.

1929 – Commander Richard E. Byrd made the first flight over the South Pole.

1940 – The Armistice Day Blizzard killed nearly 150 people and stretched from Kansas to Michigan.

1946 – The Exchange National Bank of Chicago, Illinois, instituted the first drive in banking service in America.

1956 – The largest iceberg on record was sighted by the USS Glacier, a U. S. Navy icebreaker, about 150 miles west of Scott Island in the Southern Hemisphere. It had broken from the Ross Ice Shelf in the Antarctic. It was about 208 miles long and 60 miles wide.

1966 – The first photograph was taken from Earth’s atmosphere by the satellite Gemini XII.

1970 – The Oregon Highway Division attempts to destroy a beached eight-ton sperm whale near Florence, Oregon with half a ton of dynamite. It mainly made a bigger mess.

2001 – In New York City, American Airlines Flight 587, an Airbus A300 on its way to the Dominican Republic, crashed minutes after takeoff from John F. Kennedy International Airport, killing all 260 on board and five on the ground.

2004 – A jury in Redwood City, California, convicted Scott Peterson of murdering his pregnant wife, Laci, and dumping her body in San Francisco Bay.