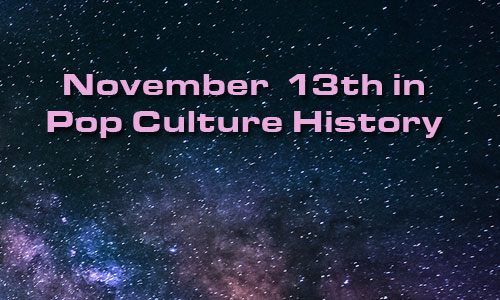 “On November 13, Felix Unger was asked to remove himself from his place of residence; that request came from his wife. Deep down, he knew she was right, but he also knew that some day he would return to her. With nowhere else to go, he appeared at the home of his friend, Oscar Madison.”
-Announcer, The Odd Couple

1789 – Ben Franklin wrote “nothing is certain, but death and taxes” in a letter to Jean Baptiste Le Roy.

1841 – James Braid first saw a demonstration of animal magnetism, which leads to his study of the subject he eventually calls Hypnotism.

1855 – A proposal for a tunnel under the English Channel was announced by French engineer M. Loèpold Favre, to connect Boulogne to Dover.

1971 – Mariner 9 was the first spacecraft to orbit another planet, reaching Mars.

1974 – set out to meet a reporter to go public with evidence of extensive safety violations. She was later found dead. Her car appeared to have been run off the road and the documents she had with her were missing.

1980 – US spacecraft Voyager 1 sent back first close-up pictures of Saturn.

1982 – The Vietnam Veterans Memorial, a monument consisting of two black granite walls engraved with the names of 58,272 US soldiers that did not return from Vietnam, was dedicated in Washington D.C.