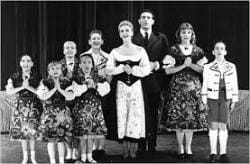 The Sound of Music, the last show that Richard Rodgers and Oscar Hammerstein would collaborate on together (Hammerstein passed away before the opening of the show) opened on Broadway at The Lunt Fontaine Theater in November 16, 1959. The show ran for a total of 1443 performances.

The Sound of Music tells the true story of The Trapp Family Singers. Maria a young postulant at the Benedictine Abbey of Nurnberg is sent to be a governess to a Captain Von Trapp’s seven children.  While she is there she teaches the children to sing together and wins the captain’s heart by bringing music back into the house. The captain and Maria fall in love right on the verge of WWII. The captain being an Austrian Navy hero from the First World War is requested to join the German Navy. Being firmly against the Germans the Trapp Family escapes to Switzerland by climbing over the mountains.

The Sound Of Music would give us many songs that will be remembered for some time to come. My Favorite Things, Climb Every Mountain and Do Re Me, to name a few. The last song to be worked on by Rodger’s and Hammerstein was Edelweiss, a song in praise of Austria that Captain sings prior to the escape from his beloved country.

The Sound of Music originally starred Mary Martin as Maria and Theodore Bikel as Captain Von Trapp. It was not well liked by the critics most, thinking it too sentimental and one going so far as to call it The Sound of Mucus. But the audience loved it and it has gone on to become one of the world’s best loved musicals. The show has been returned to Broadway many times. In 1965 it became a Movie Musical starring Julie Andrews and Christopher Plummer. In 2013 NBC ran the show live on television. The Sound of Music is still entertaining and inspiring the world.