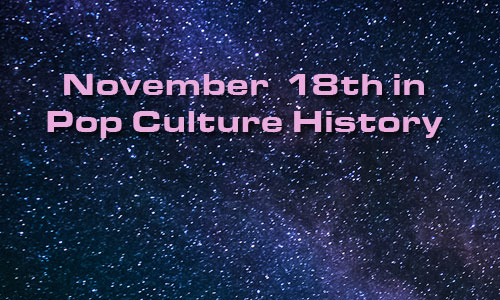 401 – The Visigoths, led by king Alaric I, crossed the Alps and invaded northern Italy.

1307 – William Tell shot an apple off his son’s head with an arrow.

1421 – St. Elizabeth’s Flood – A seawall at the Zuiderzee dike in the Netherlands breaks, flooding 72 villages and killing about 10,000 people.

1805 – Thirty women met at Mrs Silas Lee’s home in Wiscasset, Maine, and organized the Female Charitable Society of Wiscasset, the first woman’s club in America. They actually published a 32 page book upon their centennial.

1872 – The first US patent (#133,188) for an adding machine capable of printing totals and subtotals, called a “calculating machine,” was issued to E.D. Barbour of Boston, Massachusetts.

1872 – American suffragette Susan B Anthony was arrested after voting on the 5th November in Rochester New York. She was found guilty and never paid the $100 fine.

1883 – ‘Standard Time’ in the United States went into effect at noon for the first time. Prior to this, towns across the US set their own times by observing the position of the sun.

1902 – Brooklyn toymaker Morris Michtom named the teddy bear he invented after US President Teddy Roosevelt. He founded the Ideal Novelty and Toy Company in 1907.

1913 – The first airplane in the U.S. to perform a loop-de-loop was piloted by Lincoln Beachey over North Island, San Diego, California

1928 – Walt Disney’s Mickey Mouse first appeared in NY in Steamboat Willie. It seems that every time this is brought up, someone points out that Walt Disney did the original voice, and he did! Happy Birthday, Mickey Mouse!

1932 – Flowers & Trees received the first Academy Award for a cartoon.

1963 – The Touch-Tone telephone with 10 push buttons, manufactured by the Western Electric Manufacturing of the Bell System, was released commercially.

1970 – Linus Pauling declared that large doses of Vitamin C could ward off the common cold.

1978 – In Jonestown, Guyana, 918 members of Peoples Temple were murdered and/or committed suicide under leadership of cult leader Jim Jones. The bodies of over 400 of those who died are buried in a mass-grave at Evergreen Cemetery in Oakland, California.

1982 – Yentl, Amityville 3-d and A Christmas Story were released in US theaters.

1985 – Sesame Street’s Elmo was introduced. He was usually puppeteered by Kevin Clash. Since Clash’s controversial resignation in late 2012, he has been puppeteered by Ryan Dillon.

1992- The Seinfeld episode titled The Contest was broadcast. It was a controversial episode which later won an Emmy and was named the number one episode of all time by TV Guide magazine.

1993 – The North American Free Trade Agreement (NAFTA) was approved by the House of Representatives.

1999 – 12 people were killed and 27 injured at Texas A&M University when a massive bonfire under construction collapsed.

2115 – 100 Years: The Movie You Will Never See is a secret film written by and starring John Malkovich. 100 Years is kept in a high-tech safe in bulletproof glass that will open automatically on November 18, 2115, the date of the film’s release. The plot remains a complete mystery.