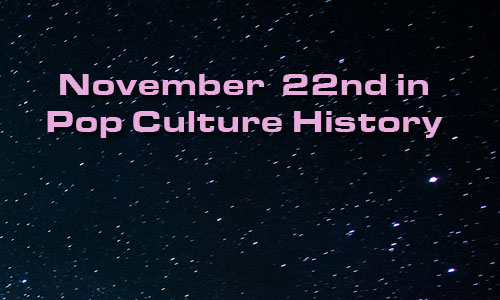 1928 – Bolero by Maurice Ravel, was first performed publicly (Paris). The original title for the music was ‘Fandango.’

1932 – The patent (#1,888,533) for a computer pump was issued to the inventors, Robert J. Jauch, Ivan R. Farnham and Ross H. Arnold for their “Liquid Dispensing Apparatus”. The technology has led us to the modern gas pump.

1935 – First commercial crossing of Pacific Ocean by plane (China Clipper). On November 29, the airplane reached its destination, Manila, after traveling via Honolulu, Midway Island, Wake Island, and Guam, and delivered over 110,000 pieces of mail.

1951 – Pope Pius XII declared, at the opening meeting of the Pontifical Academy of Sciences, that the Big Bang theory does not conflict with the Catholic concept of creation.

1986 – Mike Tyson became the youngest Heavyweight Champion in history today with a second round knockout win over Trevor Berbick.