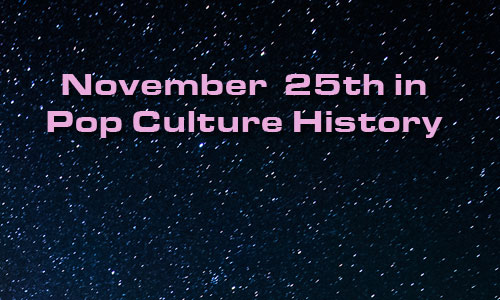 1920 – The Philadelphia Thanksgiving Day Parade is the oldest in the US, started on this date.

1940 – Woody Woodpecker debuted with release of Walter Lantz’s “Knock Knock.” He was actually the antagonist to Andy Panda (already established character) in the cartoon.

1959 – Once Upon a Mattress opened at Alvin Theater New York City. The play was written as an adaptation of the Hans Christian Andersen fairy tale The Princess and the Pea.

1973 – Maximum speed limit was cut to 55 MPH as an energy conservation measure in the US.

1979 – Pat Summerall and John Madden broadcasted a NFL game (Vikings vs Buccaneers) together for the first time.

2009 – Wikileaks – Information about 9/11 attacks on the World Trade Centre and the Pentagon were distributed online, with more than 500,000 intercepted pager messages, mainly from US officials posted by wikileaks founder, Julian Assange.