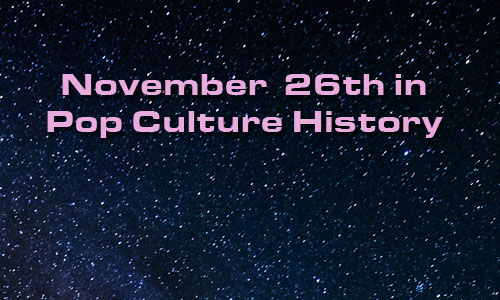 1716 – First African lion was exhibited in America (in Boston). It was just a single lion, which supposedly later joined a “menagerie” which was basically a traveling circus of exotic animals.

1789 – First (unofficial) national Thanksgiving in USA recognized by the new government. The 1621 good harvest celebration at Plymouth in present-day Massachusetts was first celebrated in North America.

1842 – The University of Notre Dame was founded.

1922 – English archaeologist Howard Carter opened King Tutankhamun’s virtually intact tomb in Egypt. Over the centuries almost every mummy tomb had been found and plundered – this was possible the greatest archaeological find of that period.

1922 – The Toll of the Sea debuted as the first general release film to use two-tone Technicolor. (The Gulf Between was the first film to do so, but it was not widely distributed.)

1941 – President Franklin D Roosevelt established that the fourth Thursday in November would be Thanksgiving Day .

1945 – Charlie “Bird” Parker lead a record date for the Savoy label, marketed as the “greatest Jazz session ever.” Recording as Charlie Parker’s Reboppers, the group included Dizzie Gillespie and Miles Davis on trumpet, Curly Russell on bass and Max Roach on drums. The tracks included during this session include Ko-Ko, Billie’s Bounce and Now’s the Time.

1976 – The Sex Pistols released their debut single Anarchy In The UK. It came from their only album – ‘Never Mind the Bollocks, Here’s the Sex Pistols.’

1983 – Six gunmen broke into the Brinks Mat warehouse at the Heathrow Airport making off with three tons of gold bars valued at almost 48 million dollars (at that time). In modern perspective, it is worth over $125,000,000. Most of the gold was never recovered.

2155 – (fictional) Dave Lister was found in a cardboard box under the pool table in the Aigburth Arms, om TV’s Red Dwarf.