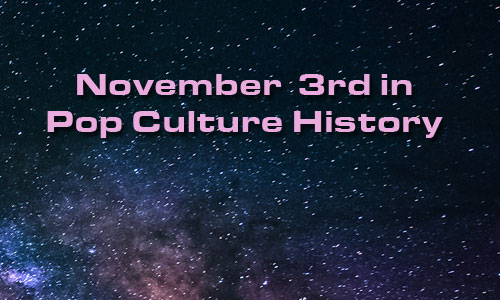 November 3rd is National Sandwich Day! Not coincidentally, it is also the birthday of John Montagu, the Earl of Sandwich, who is credited with inventing everyone’s favorite one-handed meal when he had his meat brought to him between slices of bread so he wouldn’t have to stop gambling.

To celebrate this genius contribution to gustatory culture, what sandwich will you order today – and what kinds of things can you do one-handed while you’re eating it?

1838 – The Times of India, the world’s largest circulated English language daily broadsheet newspaper is founded as The Bombay Times and Journal of Commerce.

1863 – US patent for an antifouling paint for ships’ hulls was issued to J.G. Tarr and A.H. Wonson (# 40515) for a copper oxide, tar and naptha mixture. It helped keep ships free from barnacles growing on the hull.

1913 – The USA introduced a permanent income tax, although the US federal government imposed the first, although temporary, personal income tax, on August 5, 1861, to help finance the Civil War.

1955 – Carlton Schwerdt and F.L. Schaffer crystallized the polio virus. Their research laid the groundwork for the polio vaccine.

1947 – Howard Hughes piloted his huge wooden airplane, the Spruce Goose on its only flight, which lasted about a minute, over Long Beach Harbor in California.

1954 – The first Godzilla film was released and marks the first appearance of the character.

1956 – The Wizard of Oz was shown on television for the first time, on CBS. Although a moderate success when released theatrically in 1939, it is now recognized as the most watched film in television history.

1957 – Sputnik 2 was launched, with the first live animal sent into space, a Siberian husky dog named Laika (‘barker’ in Russian).

1988 – Talk-show host Geraldo Rivera’s nose was broken as Roy Innis brawled with skinheads at a TV taping. He did not press charges, claiming that he did not wish to be “tied up with the roaches” and also said that “if there ever was a case of deserved violence, this was it.”