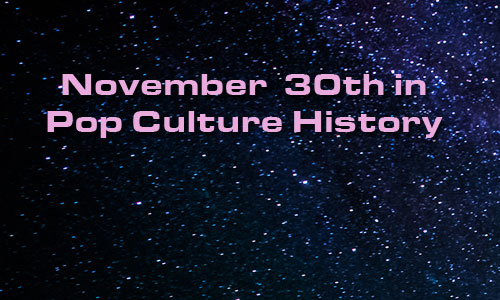 3340 BC – Earliest believed record of an eclipse, in Ireland.

1609 – Galileo Galilei realized that the moon was a landscape, not a flat surface on a circle in the sky.

1858 – The Mason Jar was invented and patented (#22,186) by Philadelphia tinsmith John Landis Mason.

1954 – First proven meteorite known to strike a woman/person (Liz Hodges, in Sylacauga, Alabama). It took a year of pleading with the air force, but she was allowed to keep the 9 pound meteorite.

1956 – CBS became the first network to broadcast from videotape. It was a rebroadcast to the West Coast of the 15-minute Douglas Edwards and the News program. It was recorded on 2-inch tape with an Ampex Mark IV machine.

1993 – The Brady Bill, requiring a five-day waiting period for handgun purchases and background checks of prospective buyers, was signed into law.

1994 – Italian cruise ship MS Achille Lauro caught fire off Somalia, with 3 people dead, and most of the nearly 1,000 passengers and crew escaping in lifeboats. It sank on December 2nd.

2009 – CERN (European Organization for Nuclear Research) started. “CERN’s Large Hadron Collider has today become the world’s highest energy particle accelerator, having accelerated its twin beams of protons to an energy of 1.18 TeV in the early hours of the morning.” CERN is experimenting with things like “The Big Bang” but hopefully on a smaller scale.