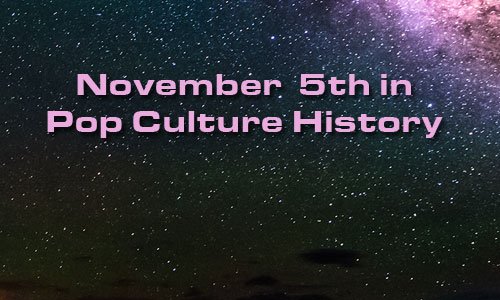 1605 – Gunpowder Plot – an attempt to blow up English Parliament. Plot discovered and leader Guy Fawkes was tortured and later executed. He was caught with 36 barrels of gunpowder at the House of Lords.

1639 – First post office in the colonies was set up in Massachusetts, with permission from King William and Queen Mary. The United States Post Office (USPO) was created on July 26, 1775, by decree of the Second Continental Congress.

1852 – American Society of Civil Engineers and Architects was founded.

1895 – Patent attorney George B. Selden of Rochester, New York, received the first US patent (#549,160) for a gasoline-driven automobile.

1935 – Parker Brothers launched the board game of Monopoly. Marvin Gardens is actually a misspelling of ‘Marven Gardens’, an actual locale in Atlantic City.

1955 – (fictional) Doc Brown fell and hit his head, giving him a vision of a mechanism allowing for time travel, the Flux Capacitor in the 1985 film Back to the Future.

1966 – Patrick Troughton appeared as The Doctor in The Power of the Daleks as the Second Doctor. He had a fleeting appearance in the prior week’s episode – which, as of today, no known copies exist, although there is a full-length animated reconstruction of its missing episode.

2007 – The Android mobile phone operating system was unveiled by Google.

2009 – US Army Major Nidal Malik Hasan (US Army Medical Corps) killed 13 and wounded 43 at Fort Hood, Texas in the largest mass shooting ever at a US military installation. Although it has been officially labeled as work place violence, many people consider it an act of terrorism.