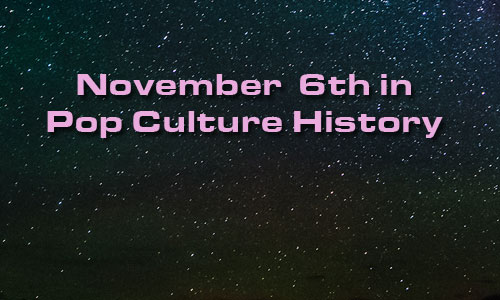 1572 – A supernova was observed in constellation known as Cassiopeia. Queen Cassiopeia was the wife of Cepheus, King of Aethiopia and mother of Princess Andromeda in Greek mythology.

1789 – Pope Pius VI appointed Father John Carroll as the first Catholic bishop in the United States. He is also known as the founder of Georgetown University.

1861 – Jefferson Davis was elected to 6 year term as Confederate president. After the war was over, Davis was captured and he was accused of treason but was not tried and was released after two years.

1862 – The direct telegraphic link between New York and San Francisco was established.

1869 – First intercollegiate football (soccer) game (Rutgers 6, Princeton 4). There were two games that season, and each team won one game. At that time, American Football was closer to the game of rugby.

1962 – The United Nations General Assembly passed a resolution condemning South Africa’s apartheid policies and called for all UN member states to cease military and economic relations with the nation.

2012 – US territory Puerto Rico voted to become a US State. More to come.