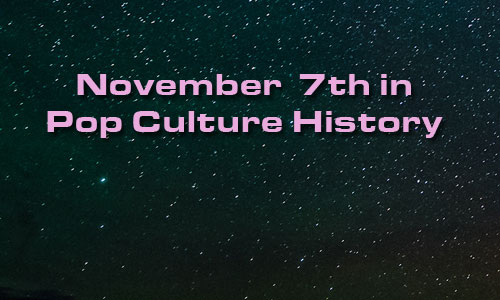 November 7 in Pop Culture History
1492 – The Ensisheim Meteorite, the oldest meteorite with a known date of impact, struck ground one afternoon in a wheat field outside the village of Ensisheim, Alsace, France.

1665 – First edition of the London Gazette was printed. At the time it was called “The Oxford Gazette”.

1786 – The oldest musical organization in the United States was founded as the Stoughton Musical Society.

1874 – First cartoon depicting the elephant as Republican Party symbol, by Thomas Nast. He is also know as being the first to draw our modern version of Santa Clause.

1876 – The patent (#184,207) for the first US cigarette manufacturing machine was issued to Albert Hook of New York City.

1885 -The Canadian Pacific Railway, connecting the Atlantic and Pacific coasts, was completed.

1908 – Butch Cassidy and the Sundance Kid were reportedly killed in San Vicente, Bolivia.

1908 – Professor Ernest Rutherford announced in London that he had isolated a single atom of matter. The experiment took place in the days before.

1913 – Great Lakes Storm of 1913 lasted until November 10th. It killed over 250 people and was concentrated around Lake Huron.

1914 – The first issue of The New Republic magazine was published.

1932 – First broadcast of Buck Rogers in the 25th century on CBS-radio. The Buck Rogers comic strip made its first newspaper appearance on January 7, 1929.

1944 – Franklin D. Roosevelt (D) was elected for a record fourth term as President of the United States of America.

1967 – Carl B. Stokes (D) was elected as Mayor of Cleveland, Ohio, becoming the first African American mayor of a major American city.

1976 – Gone With the Wind was televised for the first time, on HBO. Gone with the Wind was originally a novel written by Margaret Mitchell, first published in 1936. The film was released in 1939.

1991 – Magic Johnson announces that he is infected with HIV and retired from the NBA.

2003 – Star Wars: Clone Wars debuted on The Cartoon Network. In addition to the feature films, this series is also generally considered ‘canon’ – which means it officially happened in the Star Wars universe.

2006 – At O’Hare International Airport, UFO Sighting Near Gate C-17 twelve employees reported seeing a metallic saucer shaped craft hovering over the airport. The FAA stance concluded that the sighting was caused by a weather phenomenon and that the agency would not be investigating the incident, which many think is odd in the post-2001 security-enhanced world of airport security.