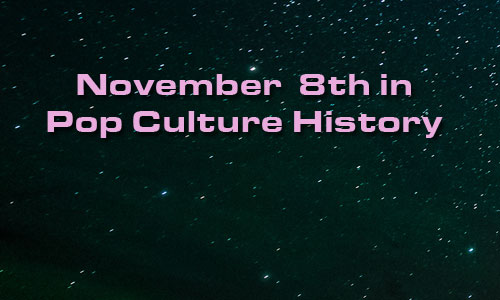 392 – Roman Emperor Theodosius declared the Christian religion the official state religion. He also dissolved the order of the Vestal Virgins in Rome, which had been in place for almost 400 years.

1519 – First meeting of Moctezuma II & Hernán Cortés in Tenochtitlan, Mexico. #bigmistake Little is known about him, except that was the the leader of the Aztecs and was killed in the Spanish conquest of Mexico. “Montezuma’s Revenge’ is named after him.

1601 –The Bodleian Library was established in Oxford, England.

1731 – In Philadelphia, Benjamin Franklin (with members of his Junto Club) opened the first US library. Plans had begun in earnest in July, and Ben retired as the Librarian in 1734.

1895 – Wilhelm Röntgen observed X-rays for the first time during an experiment at Würzburg University, Germany. It earned him the first Nobel Prize in Physics in 1901, and element 111, roentgenium, was named after him.

1904 – U.S. patent (#774,250) for a separable electric attachment plug was issued to inventor and manufacturer Harvey Hubbell of Bridgeport, Connecticut. It is essentially the plug we use today.

1965 – Days of our Lives premiered on NBC. The original title sequence voiced by MacDonald Carey is still used.

1979 – Nightline premiered on ABC. Frank Reynolds was the original presenter, Ted Koppel too over shortly after the program began.

1980 – Voyager 1 space probe discovered the 15th moon of Saturn. We’ve counted 62 moons and dozens of moonlets around the planet to date.

1995 – General Hospital character Stone Cates died of AIDS on the show, right after he was informed that he had infected his lover Robin Scorpio with HIV.