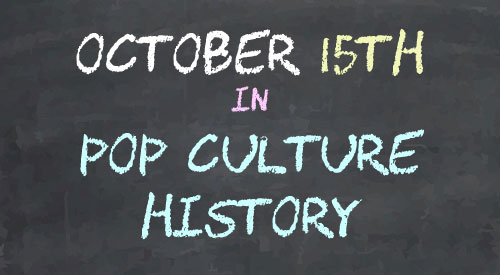 October 15 in Pop Culture History
On October 15, 1964 Congress resolved that October 15 would be proclaimed White Cane Safety Day. President Lyndon Johnson immediately made a proclamation sealing this as an official day to recognize the advancements and achievements of blind individuals. It is called White Cane Safety Day because the white cane is a recognizable symbol a blind person’s independence.

1582 – Pope Gregory XIII implemented the Gregorian calendar. In several countries October 4 of that year was followed directly by October 15.

1888 – The “From Hell” letter sent by Jack the Ripper was received by the London authorities (Whitechapel Vigilance Committee).

1940 – The Great Dictator, the satiric social commentary film by and starring Charlie Chaplin was released.

1951 – I Love Lucy premiered on CBS. It was filmed on three cameras, a TV first.

1966 – The Black Panther Party was created by Huey P. Newton and Bobby Seale.

1987 – Bob Barker, host of The Price Is Right, stopped dying his hair. The audience gave him a standing ovation when he came onstage, white-haired.

2000 – Curb Your Enthusiasm premiered on HBO

2001 – Smallville premiered on The WB