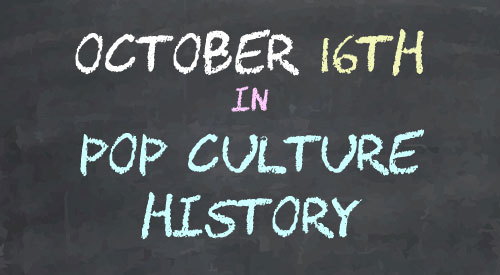 October 16 in Pop Culture History
On October 16, 1958 Patricia Bay Haroski (an employee of State Farm Insurance Company) registered Boss’s Day with US Chamber of Commerce. Haroski chose the date because it was the date of her boss’s birthday who was also her father.

1793 – Marie Antoinette, widow of Louis XVI, was guillotined at the height of the French Revolution. The phrase “Let them eat cake” is often attributed to Marie but there is no evidence she ever said it.

1814 – The Great Beer Flood. More than 323,000 gallons of beer burst out of the Meux and Company Brewery and poured into the streets of St. Giles, London, England.

1846 – Massachusetts General was the first hospital in the world to use anesthetics. “Ether Day,” the anniversary of that event is still celebrated today by its doctors and staff annually on October 16th.

1847 – The novel Jane Eyre by Charlotte Brontë was published.

1920 – A bomb exploded on Wall Street outside the NYSE building, killing 33 people and injuring more than 400. The perpetrators were never found.

1950 – The Lion, the Witch and the Wardrobe by C.S. Lewis was published, beginning The Chronicles of Narnia series.

1968 – Tommie Smith and John Carlos were kicked off the US team for participating in the 1968 Olympics Black Power salute.

1997 – (fictional)  The Robinson family departed from Earth aboard the Jupiter II space craft and becomes Lost In Space. (TV show)