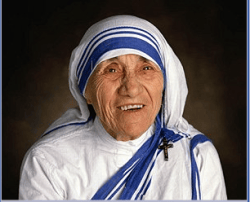 Mother Teresa of Calcutta was awarded The Nobel Peace Prize on October 17, 1979. Mother Theresa was a Roman Catholic nun who lived from August 25, 1910 to September 5, 1997. Mother Teresa began The Missionaries of Charity which served the poor, homeless, disabled, the sick and the dying. This organization now has over 4500 sisters working worldwide. She received The Nobel Peace Prize “for work undertaken in the struggle to overcome poverty and distress, which also constitutes a threat to peace.”

This entry was posted in History, Holidays, October, Trivia