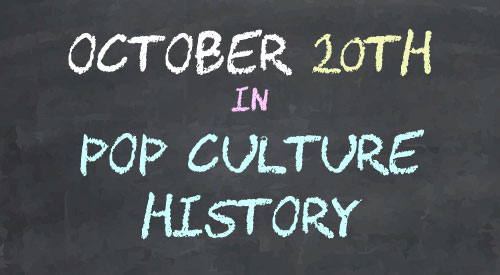 October 20 in Pop Culture History
1720 – Caribbean pirate Calico Jack Rackham, one of the first pirates to use the “Jolly Roger”, was captured by the Royal Navy.

1818 – The Convention of 1818 was signed between the US and the UK which settled the Canada/United States border on the 49th parallel for most of its length.

1981 – Two police officers and a Brinks armored car guard were killed during an armed $1.6 million robbery in Rockland County, New York, carried out by members of the Black Liberation Army and Weather Underground.

2001 – Concert For New York: A Tribute To Heroes was broadcast on VH1, and other networks. It raised funds for the families of those killed by the September 11 terrorist attacks.