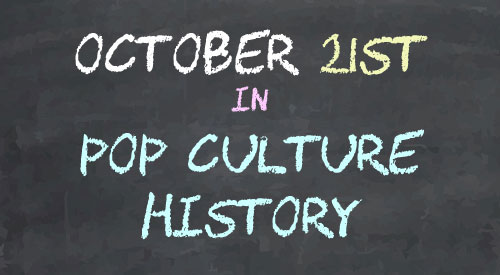 1797 – In Boston Harbor, the 44-gun United States Navy frigate USS Constitution was launched. It was the third such vessel completed for the US Navy.

1854 – Florence Nightingale and a staff of 38 nurses are sent to the Crimean War.

1921 – President Warren G. Harding delivered the first speech by a sitting US President against lynching in the Deep South.

1940 – For Whom the Bell Tolls by Ernest Hemingway was published.

1973 – John Paul Getty III’s ear was cut off by his kidnappers and sent to a newspaper in Rome, with a note – “This is Paul’s ear. If we don’t get some money within 10 days, then the other ear will arrive. In other words, he will arrive in little bits.”

1978 – Frederick Valenteich (flying a Cessna 182 airplane) disappeared over Melbourne, Australia right after describing a UFO to the control tower. The last seventeen seconds of his transmission were described as ‘metallic scraping.’

1994 – North Korea and the United States signed an agreement that required North Korea stop its nuclear weapons program and agree to inspections. On October 9, 2006, North Korea announced it had successfully conducted its first nuclear test.