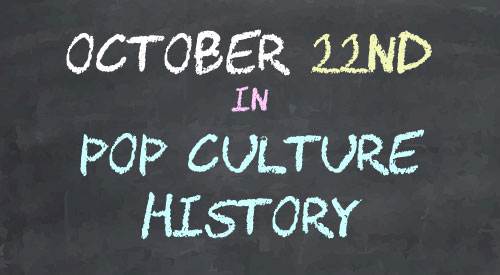 October 22 in Pop Culture History
362 – The temple of Apollo at Daphne, outside Antioch, (in modern day Turkey) was destroyed in a fire.

1746 – The College of New Jersey (renamed Princeton University in 1896) received its charter.

1836 – Sam Houston was inaugurated as the first President of the Republic of Texas.

1883 – The Metropolitan Opera House in New York City opened (with a performance of Gounod’s Faust).

1926 – J. Gordon Whitehead punched magician Harry Houdini, while he was still preparing for it) in the stomach in Montreal, later causing his death.

1962 – US President John F. Kennedy announced that American reconnaissance planes had found Soviet nuclear weapons in Cuba, and that he had ordered a naval “quarantine” of the Communist nation.

1964 – Jean-Paul Sartre was awarded the Nobel Prize in Literature, but turned down the honor because “a writer should not allow himself to be turned into an institution”.