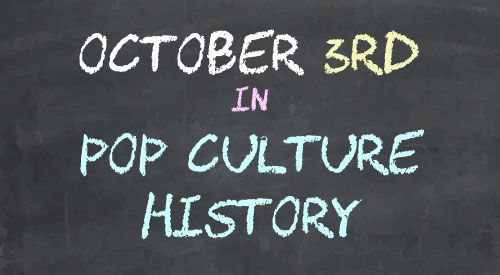 October 3 in Pop Culture History
1863 – The last Thursday in November was declared as Thanksgiving Day by US President Abraham Lincoln.

1949 – WERD, the first black-owned radio station in the United States, opened in Atlanta. WERD was at 860 AM, and is now WAEC.

1957 – The California State Superior Court ruled that Allen Ginsberg’s Howl and Other Poems was not obscene.

1988 – Turner Network Television (TNT) began on cable, with Gone With The Wind

1995 – Millions of people people stopped what they were doing and tuned in for the announcement of the verdict in the O.J. Simpson trial. The “Not Guilty” verdict was met with both praise and shock, but millions of Americans were sitting by a radio or TV when it was announced. So many people (100 million+) were watching/listening to the O.J. Simpson verdict that the afternoon cost an about $480 million in lost productivity, about $750 million today.