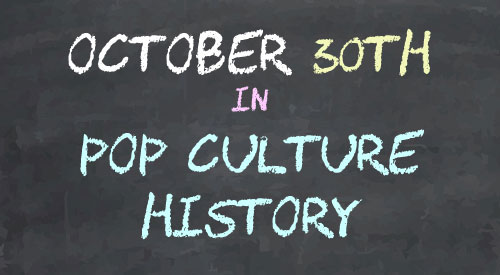 1945 – Jackie Robinson of the Kansas City Monarchs signed a contract for the Brooklyn Dodgers, breaking the baseball color barrier.

1938 – Orson Welles broadcast his radio play of H. G. Wells’s The War of the Worlds.

1974 – The Rumble in the Jungle boxing match between Muhammad Ali and champion George Foreman took place in Kinshasa, Zaire. Ali won by knockout, knocking Foreman down just before the end of the eighth round.

1987 – NEC released the first 16-bit (fourth generation) video game console, the PC Engine, in Japan. It was later sold around the world under the name TurboGrafx-16.

2002 – Warren Zevon was featured on the Late Show with David Letterman as the only guest for the entire hour, performing several songs and spoke about being diagnosed with inoperable lung cancer.