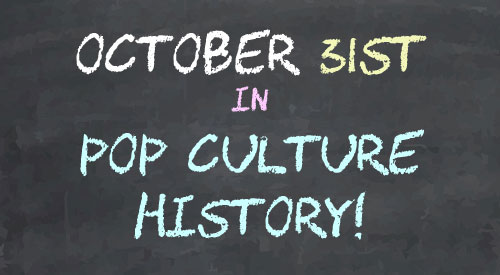 October 31 in Pop Culture History
683 – During the second Second Islamic Civil War and the Siege of Mecca, the Kaaba caught fire and burned down.

1517 – Martin Luther posted his 95 Theses on the door of the Castle Church in Wittenberg, Germany.

1913 – Dedication of the Lincoln Highway, from Times Square in New York City to Lincoln Park in San Francisco. It was the first automobile highway going across United States.

1926 – Magician Harry Houdini died of gangrene and peritonitis that developed after his appendix ruptured (after an unexpected puch to the stomach a few days earlier).

1968 – “October Surprise” – Just before the US elections, US President Lyndon B. Johnson announced that he had ordered a complete cessation of “all air, naval, and artillery bombardment of North Vietnam” effective November 1.

1991 – Are You Afraid of The Dark premiered on Nickelodeon

1998 – WKOW in Madison, Wisconsin became one of the first high-definition broadcasts in digital television.