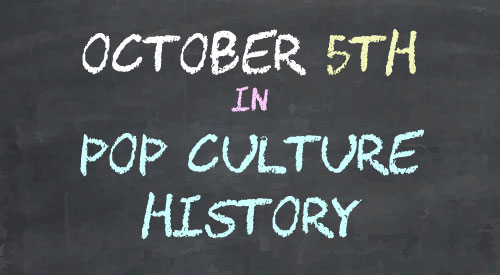 October 5 in Pop Culture History
October 5, 1994 was the first celebration of World Teachers Day. This day is set aside to commemorate and celebrate teachers in the local community. The day has been recognized by The United Nations. Communities are encouraged to sponsor and plan events around the day. Many countries including the United States celebrate World Teachers Day.

1944 – Suffrage was extended to women in France.

1947 – The first televised White House address was given by US President Harry S. Truman.

1950 – You Bet Your Life, featuring Groucho Marx, premiered on NBC.

1966 There was a partial core meltdown at the Enrico Fermi demonstration nuclear breeder reactor, near Detroit, Michigan.

1982 – Johnson & Johnson began a nationwide product recall in the US for all products in its Tylenol brand after several bottles in Chicago were found to have been laced with cyanide, resulting in seven deaths.

1984 – Marc Garneau became the first Canadian in space, flying aboard the US Space Shuttle Challenger.