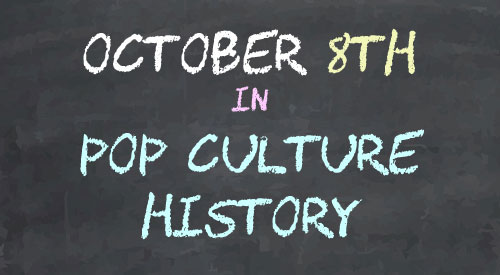 Emergency Nurses Day was established on October 8, 1989 in order to honor the nurses who specifically work in hospital emergency rooms. These nurses play an intrinsic part of a community’s life. Responding quickly to life endangering circumstances but also having to have a compassionate heart towards patients who are seriously ill and towards families who will find out in the emergency room of the loss of a loved one. Thank an ER nurse today!

1917 – Executed labor leader and song writer Joe Hill had his ashes seized by the US federal government on Oct 8, 1917. The ashes were held for 71 years as they were seen as subversive. Before he died, Hill asked to be cremated and specified that his ashes be scattered in every state except Utah.

1967 – Che Guevara and his men were captured in Bolivia.

1986 – The Fox Broadcasting Company became the US’ fourth commercial broadcast television network, with The Late Show, hosted by Joan Rivers.

2001 – US President George W. Bush announced the establishment of the Office of Homeland Security.

2011 – On September 26th, 2011 Mikey Welsh posted on Twitter, “Dreamt I died in Chicago next weekend (heart attack in my sleep). Need to write my will today” followed by, “Correction – the weekend after next”. He died October 8th, 2011 from a heart attack in his sleep in a hotel room. In Chicago.