Plum pudding is a traditional dessert in some countries typically served during the holiday season. It is made from dried fruit, spices, and suet and is sometimes steamed or boiled, then served with a hard sauce. The origin of this dish and the specific reason for its association with February 12th is unclear. Plum Pudding is a traditional English dessert usually served at Christmas and New Year’s.  There are no plums in plum pudding.  When the recipe was written in the 17th century, all dried fruit was considered plums.

If you’re an American, the term pudding may be confusing.  In England, all desserts are referred to as pudding.  In America, a pudding is a creamy-flavored dessert that is milk based.

A Plum Pudding resembles a cake and resembles a fruit cake.  It contains nutmeg, cinnamon, raisins, nuts, dates and other ingredients.  A full recipe will appear below.

A plum pudding is not baked.  It is either boiled or steamed.  The cooking process can take up to eight hours or longer.  Part of the tradition of making a plum pudding is that every household member takes a turn at stirring the mixture.  This is a way to bring luck in the coming New Year.

The reason Plum Pudding Day is celebrated on February 12th is unknown.  I would suggest this.  Since Plum Pudding Day is two days before Valentine’s Day, it could be observed by inviting all your single friends to come and stir the pudding.  Maybe this will bring them luck on holiday for lovers.

Plum pudding is usually served by pouring brandy over it and igniting the cake.  A creamy brandy sauce is often spooned over the dessert.  Brandy Butter is also served along with Plum Pudding.  Brandy Butter is butter mixed with brandy and sugar to a spreadable consistency. 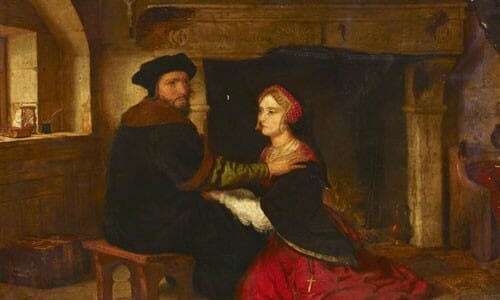