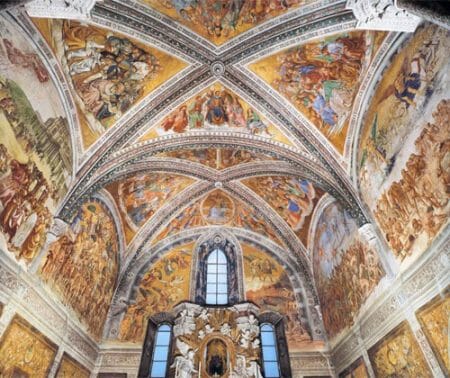 Michelangelo
In 1488, young Michelangelo was apprenticed to Ghirlandaio, who was coincidentally called upon to do interior art for the Sistine Chapel. He returned to Rome from Florence in 1505, to build statues for ‘The Pope’s Tomb.’ 50 years of interruptions made the task incomplete by the time Michelangelo died. Although he died in Rome (1564), his body was interred at the Basilica of Santa Croce, in his beloved Florence.

He was of the four  Renaissance artists to be immortalized in the Teenage Mutant Ninja Turtles, along with Raphael, Leonardo and Donatello.
In 1546, Michelangelo was appointed architect of St. Peter’s Basilica, Rome, replacing Antonio da Sangallo the Younger in the ongoing project. The rebuilding had originally begun in 1506, but little happened before his leadership. It took decades but his design was completed on November 18, 1626.
Michelangelo wrote over three hundred poems, sonnets and madrigals.
‘Doom of Beauty’ by: Michelangelo Buonarroti
Choice soul, in whom, as in a glass, we see
Mirrored in thy pure form and delicate
What beauties heaven and nature can create
The paragon of all their works to be!
Fair soul, in whom love, pity, piety
Have found a home, as from thy outward state
We clearly read, and are so rare and great
That they adorn none other like to thee!
Love takes me captive; beauty binds my soul;
Pity and mercy with their gentle eyes
Wake in my heart a hope that cannot cheat.
What law, what destiny, what fell control
What cruelty, or late or soon, denies
That death should spare perfection so complete?

This entry was posted in Art, Pop Culture