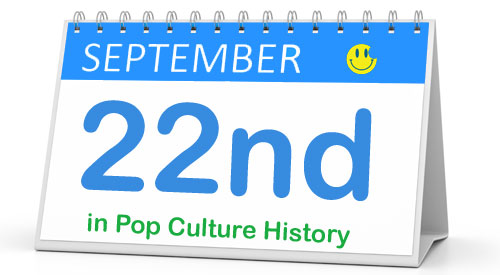 1776 – Nathan Hale was hanged by the British as a spy for the colonies during the Revolutionary War. In fairness to the British, this war hero was spying on them.

1920 – A Chicago Grand Jury convened to investigate charges that 8 White Sox players conspired to fix the 1919 World Series. They did.

1982 – Tales of the Gold Monkey premiered on ABC

1985 – Farm Aid wast first broadcast, on TNN and in syndication

2002 – Oceanic Flight 815 crashed on a mysterious island, beginning the six-season series of LOST.

2011 – CERN scientists announced their discovery of neutrinos breaking the speed of light. There were reasonably sure that the experiment would not cause a black hole that would suck up the entire planet. So far, so good.