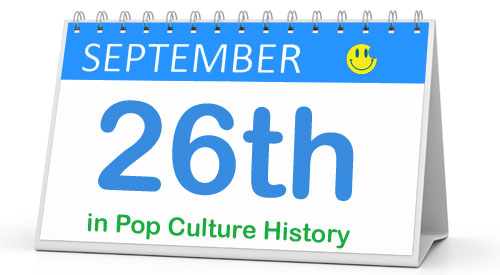 1687 – The Parthenon in Athens was partially destroyed in a gunpowder accident during the Morean War.

1933 – Machine Gun Kelly surrendered to the FBI, and shouted  “Don’t shoot, G-Men!”, which became the nickname for FBI agents.

1962 – The Beverly Hillbillies premiered on CBS.

1964 – Gilligan’s Island premiered on CBS. Although scheduled for a fourth season, CBS changed the hour-long Gunsmoke to Mondays, displacing the 7 castaways.

1969- The last Beatles album, Abbey Road, was released in the US.

1973 – The Concorde made its first non-stop crossing of the Atlantic in record-breaking time.

1982 – At the Movies with Gene Siskel and Roger Ebert premiered, in syndication

1990 – The Motion Picture Association of America announced a new rating of NC-17 to apply to adult films, replacing the “X” rating.

1992 – Roseanne Barr got her star on Hollywood’s Walk of Fame.

2011 – History International was rebranded as H2 on cable television

2011 – On September 26th, 2011 Mikey Welsh posted on Twitter, “Dreamt I died in Chicago next weekend (heart attack in my sleep). Need to write my will today” followed by, “Correction – the weekend after next”. He died October 8th, 2011 from a heart attack in his sleep in a hotel room. In Chicago.