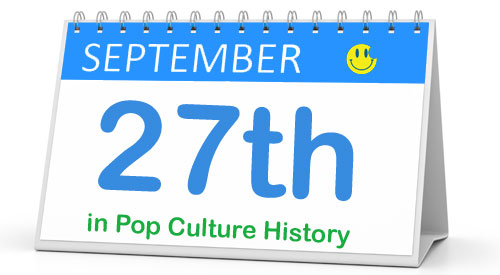 1066 – William the Conqueror and his army set sail from the mouth of the Somme river, and started the Norman conquest of England.

1540 – Pope Paul III approved the charter for the Society of Jesus (Jesuits).

1825 – The world’s first public railway to use steam locomotives, the Stockton and Darlington Railway, was opened.

1903 – Wreck of the Old 97, traveling from Monroe, Virginia, to Spencer, North Carolina, the train derailed at Stillhouse Trestle near Danville, Virginia.

1905 – Albert Einstein’s paper Does the Inertia of a Body Depend Upon Its Energy Content?, introducing the equation E=mc² was published.

1954 – The Tonight Show began broadcasting coast to coast on NBC

1962 – Rachel Carson’s book Silent Spring was published, starting the environmental movement and the creation of the U.S. Environmental Protection Agency.

1963 – Lee Harvey Oswald visited the Cuban Consulate in Mexico. More on him later.

1964 – The Warren Commission Report was given to President Johnson today, and the general public on September 27. It concluded that Lee Harvey Oswald acted alone in the assassination of President John F. Kennedy, settling the issue. (it was not really settled)

1998 – Mark McGwire hit his record-setting 69th and 70th home runs in the last game of the (regular) season.

2009 – The Cleveland Show premiered on FOX