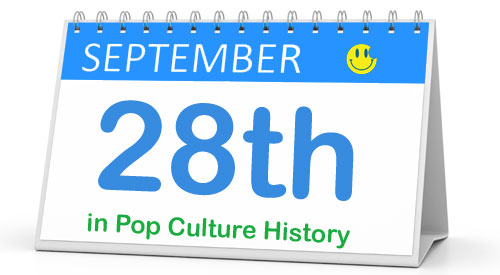 1850 – Flogging (whipping) in the Navy and Merchant Marines was abolished by the US.

1889 – The first General Conference on Weights and Measures (CGPM) defined the length of a ‘meter’ (‘metre’) as the distance between two lines on a standard bar of an alloy of platinum with ten percent iridium, measured at the melting point of ice. Since 1983, it has been defined as “the length of the path traveled by light in vacuum during a time interval of 1/299,792,458 of a second,” about 39.370 inches.

1951 – The science-fiction classic film, The Day the Earth Stood Still, was released.

1967 – Walter Washington became the first mayor of the District of Columbia (DC).

1987 – Star Trek: The Next Generation premiered, in syndication

2006 – The City Council of Reykjavik and neighboring municipalities agreed to turn off all the city lights in the capital area for half an hour, while a renowned astronomer talked about the stars and the constellations on national radio.

2006 – (fictional) September 28 – Lex Luthor used a Kryptonian crystal embedded in kryptonite to create a new landmass in the Atlantic Ocean, resulting in blackouts and earthquakes along the East Coast in Superman Returns, film.