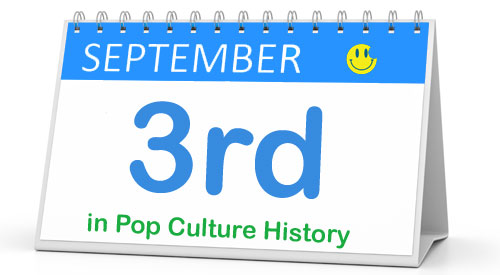 1189 – Richard The Lion-Hearted was crowned King of England at Westminster Abbey.

1752 – September 3-13 never happened for many, thanks to Great Britain adapting the Gregorian calendar. People rioted, believing that the government had stolen 11 days of their lives

1777 – At Cooch’s Bridge, in Newark Delaware, an early skirmish of American Revolutionary war took place, where the Flag of the United States was flown in battle for the first time.

1783 – The Treaty of Paris officially ended the Revolutionary War.

1944 – Anne Frank and her family were placed on the last transport train from the Westerbork transit camp to the Auschwitz concentration camp, and arrived three days later.

1951 – Search for Tomorrow premiered on CBS.

1976 – The American Viking 2 spacecraft landed at Utopia Planitia on Mars.

1992 – Austrailia’s Naughtiest Home Videos was cancelled 34 minutes into the program. Just about everyone involved was fired.

2004 – The Beslan school hostage crisis ended on its third day with the deaths of over 300 people, more than half of whom are children.