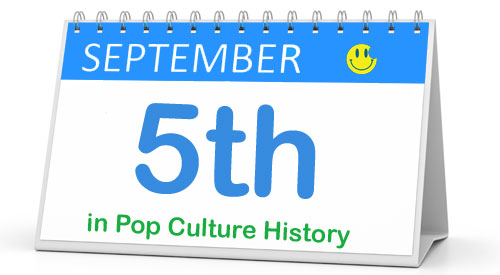 1666 – Great Fire of London ended, 10,000 buildings, including St Paul’s Cathedral, were destroyed, but only six people are known to have died.

1698 – Peter the Great decreed a tax on beards. When a citizen had more than 2 weeks worth of growth, a tax had to be paid, and the citizen was granted a two sided token stating: “the beard tax has been taken” and “the beard is a superfluous burden.”

1774 – Peyton Randolph was elected as the first president of the Continental Congress, in Philadelphia.

1836 – Sam Houston was elected as the first president of the Republic of Texas.

1906 – The first legal forward pass in American football was thrown by Bradbury Robinson of St. Louis University to teammate Jack Schneider in a 22-0 victory over Carroll College (Wisconsin).

1921 – Roscoe “Fatty” Arbuckle party in San Francisco ended with the accidental death of actress Virginia Rappe, in what became the first sex scandal in the Hollywood community.

1939 – President FDR declared US neutrality at start of WW II in Europe.

1960 – Muhammad Ali (then Cassius Clay) won the gold medal in the light heavyweight boxing competition at the Rome Olympics.

1967 – ABC’s The Fugitive finale (part 2) was one of the most-watched episodes of the decade.”Tuesday, September 5th: The day the running stopped.”

1972 – Eleven Israeli athletes were killed by Palestinian terrorists at that 1972 Munich Olympics.

1989 – Deborah Norville became news anchor of Today Show. Ratings slowly declined and by June of 1990, she was replaced by Katie Couric.

2001 – The Amazing Race premiered on CBS