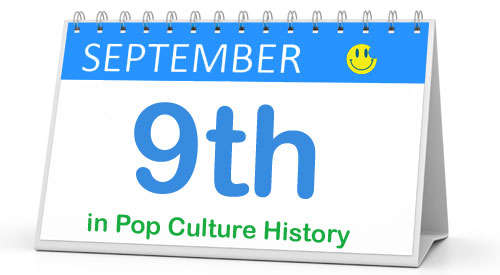 1789 – The Bill of Rights was approved by the United States House of Representatives.

1791 – Washington, DC (District of Columbia), the capital of the United States, was named after President George Washington.

1839 – John Herschel took the first glass plate photograph. He also named seven moons of Saturn and four moons of Uranus, among other achievements.

1917 – (fictional) George, the Time Traveler, encountered his friend Filby’s now-grown son James, who advises his father was lost in the Great War in George Pal’s 1960 film, The Time Machine.

1947 – The first case of a computer bug being found… a moth lodged in a relay of a Harvard Mark II computer at Harvard University.

1950 – The first American television show to incorporate a laugh track was the sitcom The Hank McCune Show, although the technique started in radio in the 1940s.

1956 – Elvis Presley appeared on The Ed Sullivan Show for the first time.

1965 – The United States Department of Housing and Urban Development was established.

1966 – The National Traffic and Motor Vehicle Safety Act was signed into law by US President Lyndon B. Johnson.

1967 – George of the Jungle cartoon debuted on ABC.

1969 – In Canada, the Official Languages Act was enacted, making French equal to English throughout the Federal government.

1972 – Fat Albert and the Cosby Kids premiered on CBS.