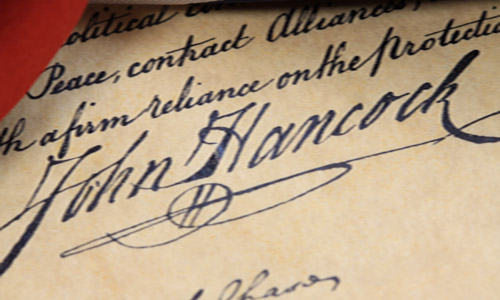 (PCM) National Handwriting Day was established by the Writing Instrument Manufacturers Association (WIMA) on January 23rd, 1977. Most people who were around then were taught penmanship as children, but that may no longer be the case for younger generations.

In modern schools, greater emphasis is placed on typing and computer technologies. Cursive is disappearing from the curriculum; many young people today learn only enough to sign their name – if they learn any cursive at all.

While WIMA may have a vested interest in keeping pens in hands, many people lament the loss of penmanship as a skill and as an art. Typewritten words lack the individuality and intimacy of handwriting, they say. And as many writers will tell you, typing and writing by hand access different kinds of creativity; sometimes the words just flow better in ink than over keys.

According to graphologists (those who study handwriting), handwritten documents can convey more than just words; they can hint at the physicality of the writer (Right-handed or left-handed? Standing up or sitting down? Did they hold the pen at the top or the bottom – inquiring minds want to know!) Handwriting analysis can even reveal aspects of the writer’s personality and state of mind.

John Hancock (whose name is sometimes synonymous with “signature”, and whose birthday is commemorated by the holiday) was the first to sign the Declaration of Independence. His famously bold and beautiful script left an indelible mark on American history.

Whether it’s a poem, love letter, diary entry, grocery list, or political missive, why not take out a pen today and write something the old fashioned way? Happy birthday John Hancock, and, to the rest of us, happy Handwriting Day!