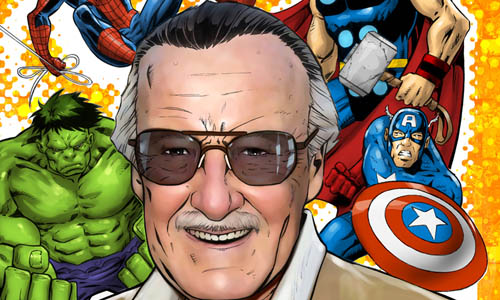 Stan Lee (Stanley Lieber, December 28, 1922 – November 12, 2018) .  As a boy Mr. Lee loved to read to quote him, “It would be easier to say what I didn’t read.”  He enjoyed The Tarzan Stories, Jules Verne, Charles Dickens, Mark Twain, Sherlock Holmes, Edgar Allan Poe and H.G. Welles.  His original career goal was to become a novelist but that desire never materialized.

Stan was 17 when he joined the Staff of Timely Comics.  According to Stan he was hired as “staff writer, proof reader and general all around gofer.”  He was asked to fill in as an editor and art director. This was to be a temporary job, but it never turned out that way and Stan stayed in that position for many years,

In the years to follow Timely Comics became Marvel comics.  Stan spent his time coming up with titles that would mirror the trend of the day, It could be romance or western or horror whatever fit what was popular.  In 1961 DC Comic’s’ The Justice League of America’ was doing very well.  The Justice League was a team of all of the DC bestselling titles, Superman Batman Wonder Woman The Flash and Green Lantern. Stan was told a superhero team needed to be created to keep up with the completion.

Lee decided that his “team” would not all be perfect and encouraging to each other, His team would have faults and personal problems.  Thus was born The Fantastic Four.  After that bestselling titles would come quickly. The Hulk, Spider-Man, Thor, and Dr. Strange would all make their debut in the early sixties.

Marvel would soon be the biggest rival of DC comics and the sale of the titles would begin to rise.   Soon letters started coming in from fans.  These letters would eventually make it in to the comics themselves as Stan would answer them publicly.

Marvel Comics would grow and soon The Avengers and The X-Men would make their first appearance as well as many other titles all keeping the Lee formula of imperfect people as heroes.

Marvel would soon create a fan club.  First in the 60s The Merry Marvel Marching Society and then in the 70s with FOOM or Friends Of Old Marvel.  Lee would soon become the best known name in comics and his success would continue to grow.

Comic Book titles would soon make it in to animated TV series followed by live action series, but it was in the early part of the 21st century that the filming comic book heroes would really make an impression on the TV and especially the movie going public.

The X-Men would lead the way followed by Spider-Man and The Fantastic Four.  Stan would make cameo appearances in many of the films and the fans were disappointed when he was not seen.  Stan Lee was the first superstar of the comic book industry and is also the Alfred Hitchcock of the 21st century.

Even in his 90s Stan continues to play an active role in the comic book world.  So the young man’s dream of becoming a novelist didn’t work out and we can all be very grateful that it did not.