Sugar Shack by Ernie Barnes
Ernest “Ernie” Eugene Barnes, Jr. (July 15, 1938 – April 27, 2009) was an African-American painter, well known for his unique style of elongation and movement. He was also a professional football player, actor and author.
In addition to being the primary cover art for Marvin Gaye’s I Want You album, Ernie Barnes’ Sugar Shack was also used for the TV show Good Times* (1974-1979, CBS)
*For copyright reasons it is often taken off youtube, but some variations of the picture with the Evans family can be seen at the end of the opening and closing credits in later seasons. 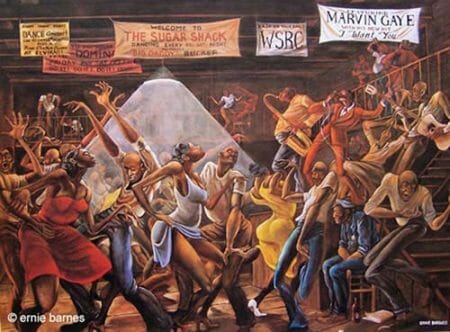 This entry was posted in Art, Music, TV & Film