Sugaring Off By Grandma Moses

Sugaring Off is a famous painting by folk artist Grandma Moses that was completed in 1943. Grandma Moses did not begin painting until the age of 78 and she is often cited as an example of an individual successfully beginning a career in the arts at an advanced age. This particular painting sold at auction for the staggering price of $1.2 million in 2006.

The painting also represents on of Grandma Moses’ most popular themes. Like many of her earliest subjects, it derived from popular illustration—in this case, a well-known Currier & Ives lithograph.

Although Moses did at the very start of her career sometimes copy compositions verbatim, she never tried to duplicate this Currier & Ives print. Rather, from the start she freely combined elements from her primary source with vignettes from other sources and from her own imagination. Certain stock images do tend to recur in the “Sugaring Off” paintings, however, among them the burning cauldron, the mother pouring maple sugar on the snow (where it would harden into instant candy), the men with buckets, and the little “sugar house.”

Sugaring Off is notable for its vast assortment of disparate activities, arrayed in a preternaturally broad landscape. This opening up of the landscape into an almost square, quiltlike panoply of detail is one of the hallmarks of the “Grandma Moses style.” As she matured further, however, Moses would revert to narrower horizontals, which required greater compression of detail. 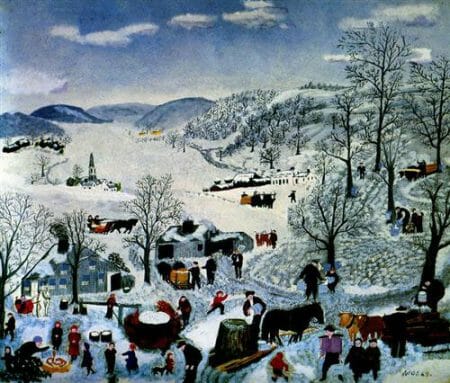