The Old Checkered House In Cambridge Valley was created by folk artist Grandma Moses in 1943. The house is something of a local legend, as it is located on the Cambridge Turnpike and it was an inn where stagecoach drivers had changed horses as far back as the eighteenth century. During the Revolutionary War, the inn served as General Baum’s headquarters and field hospital. Its checkerboard front made the house a distinctive landmark that was remembered long after it burned in 1907.

Grandma Moses has painted the same landmark house in both winter and summer settings. Many asked her how she was able to recreate a new scene each and every time and she told them that she pretended to be viewing the Checkerboard House through a window and if she shifted her viewpoint around a bit then different elements of the overall scene would fall into place. 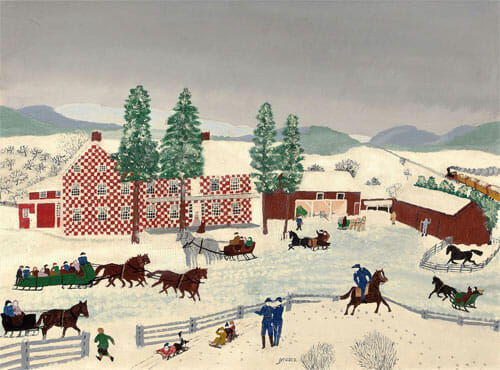