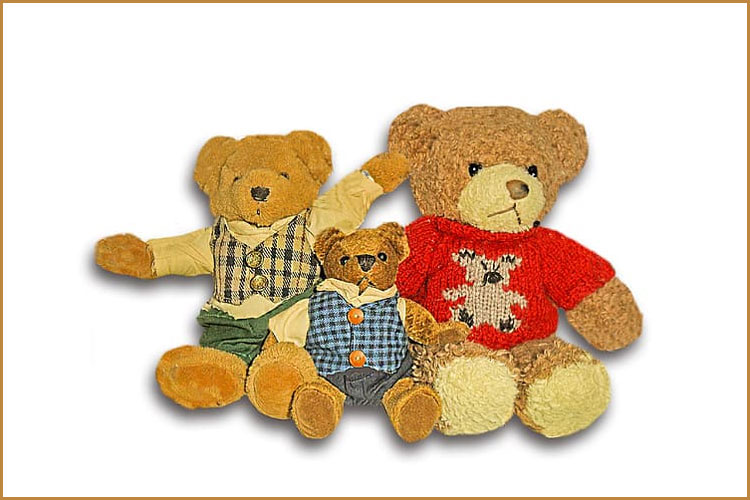 The Teddy Bear made its first appearance in a shop window in Brooklyn New York on February 15, 1903, but the story of our cuddly friend begins in 1902.

1902 was a rough year for President Theodore Roosevelt.  He had been struggling to make peace between the coal mining companies and the striking workers.  It was a hard work.  Roosevelt decided that he needed a vacation and accepted an invitation to go bear hunting in Onward Mississippi with the Governor of the state Andrew Longino.

Roosevelt was an experienced big game hunter and had many trophies to show for it.  Roosevelt had one personality flaw when it came to hunting, he was not very a patient man and told the guide, Hold Collier, “I must see a live bear the first day.”  Unfortunately, this was not to be.  Collier, not wanting to disappoint the President, gathered the dogs and eventually cornered an old black bear.  The problem was that Roosevelt was back in the camp.  Collier lost a couple of the dogs to the bear as he tied the animal to a tree and sent for The President.
When Roosevelt arrived at the spot and saw the bear he was urged to take his shot, but The President refused.  He truly believed that killing a bear tied down would not be sportsman like.

On November 16th, 1902 a cartoonist Clifford Berryman poked fun at the encounter with a cartoon of Roosevelt freeing a cub from the tree.  The cartoon was so popular that Berryman included the cub in many of his cartoons throughout the Roosevelt presidency ultimately naming the cub Teddy.

As the Berryman cartoon came out a man named Morris Michtom got an idea.  He had his wife Rose fashion a small plush bear out of velvet.  The next morning The Michtom’s displayed the bear in their storefront front window.  The Michtom’s owned a small Penny Shop where they sold handmade toys.  To their great surprise hundreds of people wanted to purchase the new “Teddy Bear”, but the Michtom’s weren’t sure they should sell it.

The Michtom’s decided to send Rose’s original bear to President Roosevelt as a gift for his grandchildren.  Included with the bear was a note requesting Roosevelt’s permission to use his name on the new toy.  Permission was granted and on February 15, 1903 The Teddy Bear went on sale in Brooklyn NY.

The Teddy Bear had had a wide and varied history since then.  Some 20 years later a young boy named Christopher Robin Milne would be given a bear bought at Harrod’s.  He would name the bear Pooh and a franchise of children’s literature would be born.

But Winnie the Pooh is not the only Teddy Bear that would have his named changed and obtain fame.  On Christmas Eve 1956 Michael Bond noticed a lone Teddy Bear sitting on a shelf in a shop near Paddington station.  He bought the bear for his wife as a Christmas present and at the same time was inspired to write a story.  Ten days later the first Paddington Bear story was completed it would take until 1958 for the book to be published but since then Paddington had become a worldwide phenomenon inspiring a TV show and two films.  In 1972 the first toy Paddington Bear hit the shelves.

Corduroy is the third Teddy Bear to have a name change.  Corduroy is a children’s book was published in 1968.  It was written Don Freeman and has had a solid following also.  It was named one of the Teachers 100 top books for children in 2007.  The story has also been turned into a made for TV short film in 1984 and two short lived TV series.  The story is now in development for a feature film.

Other animals also became popular as stuff toys.  In the  1970s and 80s the stuffed Snoopy, a creation of Charles M Schulz would outsell the Teddy Bear for a while, but with the death of Schulz and the arrival of Teddy Ruxpin and Build A Bear shops Snoopy would take second place to the Teddy Bear.

The teddy Bear would inspire two popular songs that would make into The American Songbook.  The most popular of these was recorded by Elvis Presley for the soundtrack of his second motion picture Loving You.  The songs title is  (Let Me Be Your) Teddy Bear .

The second is a popular children’s song called The Teddy Bear’s Picnic and was written as a melody alone by American composer John Walter Bratton in 1907.  Lyrics were added in 1932 by Irish lyricist Jimmy Kennedy.  The song has been recorded over the years by many artists including Anne Murray.

Form the beginning of the 20th century and going strong in the 21st century The Teddy Bear continues to enrapture children of all ages.