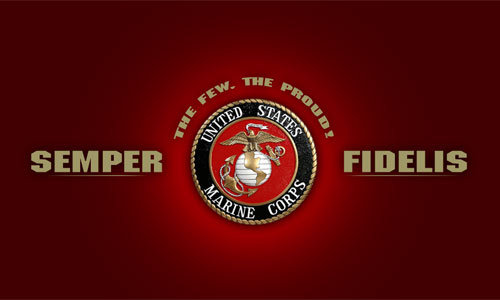 USMC stand for The United States Marine Corps and November 10th has been chosen to celebrate and honor these brave men.  The Marine Corps was established on November 10, 1775 to aid the navy during The Revolutionary War.  It was created in The Tun Tavern on Water Street in Philadelphia and this is considered the official birthplace of The Marines.  For Economic reasons The Marines were disbanded at the end of the Revolutionary War,  only to be re-created by Congress in 1798.  It was at this time that name became The United States Marine Corps.

The day is celebrated by marines everywhere.  There are parades and military drills as well as speeches and other types of pomp and circumstance.  In Washington DC however there is an official Birthday Ball which ends in the cutting of USMC Birthday Cake.  One year the cake was made to resemble the Tun Tavern where the Marine Corps were born.

Of course the Marine Corps has been used in all kinds of film movies and plays.  One of the most notable is Gomer Pyle USMC a situation comedy that ran from 1964 1969 and starred Jim Nabors.