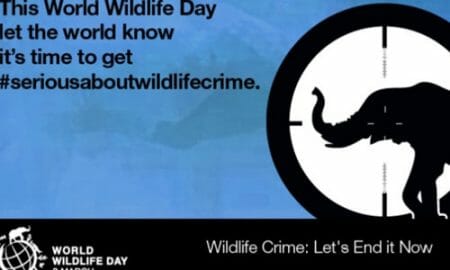 World Wild Life Day is a day that both wild plants and animals are celebrated and also a day to be aware of what human beings are doing to endanger the delicate balance of the world eco-system.  The United Nations proclaimed March 3 as World Wildlife Day on December 20, 2013.

Animals and plants are both being hunted and harvested at such a rate that even the tiger is at near extinction record with only a little over 3000 remaining on the planet.  Wildlife which includes aquatic life is being threatened by human being’s disregarding the need to take care of the world around them.

We are not really owners of this planet we live on. We are at best renters and as such we leave behind a trail of destruction in which whole species get wiped out.  We need to be stewards.  Being a steward means taking care of what we have until it is no longer in our charge.  A steward knows not to slaughter all of his boss’s cattle because if some weren’t left over there would be no way for there to be more.

We need to treat all of wildlife in this way, always ready to take care of a species that is thinning out. The sea lion, the caribou, some species of sheep, the grizzly bear, the Florida panther, 3 species of sea turtles, 2 species of crocodile and many others are just some of the animals at risk in the United States alone.

This is day of awareness.  This is a day that Google can be used to its best advantage.  Find out what animals are disappearing or what types of plant life.  Be aware of the  endangered animals that reside around where you live and then write your congressman and representatives that you want to see these animals protected.

There are also organizations that need volunteers to rescue wild animals that have been hurt and then nurse them back to health so that they can be set free again. We are not above nature, we are part of it and we need to learn to do our best to take care of it.