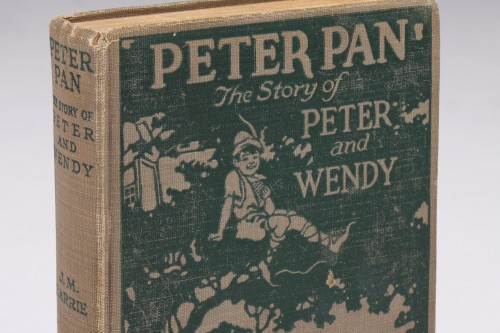 (PCM)Peter Pan Or The Boy Who Wouldn’t grow up opened on December 27, 1904 at the Duke of York Theater in London England.

Peter Pan was written by the playwright/novelist James M. Barrie.  Barrie had been influenced to write the play after developing a friendship with the boys of Sylvia Llewelyn Davies.  He would make stories up for the boys and these stories eventually became Peter Pan.  One of the names of the boys was Peter.  And actually the names of all the boys of the family would eventually turn up in the play.

Peter has almost always been played, on stage, by a woman.  The reason for this is twofold a small boy would have trouble in keeping the lines in memory and secondly a woman is much lighter to use in the harness that allows Peter to fly.

The first actress to portray Peter was Nina Boucicault.  Nina had worked for Barrie the Previous year in his play Little Mary.  That play however only had a mild success.

The story of Peter Pan is fairly simple.  Peter had been coming to the Darling’s nursery window to listen to the stories that Mrs. Darling would tell to her three children Wendy John and Michael.  One night Mrs. Darling sees him and opens the window but all she is able to catch is Peter’s shadow.  Wanting his shadow back Peter flies thru the nursery window to find his shadow with his fairy friend Tinkerbell, and tries to stick the Shadow back on with soap.  Not succeeding he begins to cry and wakes up Wendy.

Wendy sews the shadow back on for Peter and Peter convinces Wendy that she should come with him to his home of Neverland.  Wendy is enchanted with the idea and wakes her to brothers to accompany her, Peter teaches the children how to fly and they are on their way.

The children arrive in Neverland and have adventures with both Indians and pirates, but eventually, feeling the need to be home again, they leave.  Peter had a small group of boys that lived in Neverland with him.  They were called the lost boys.  Wendy convinces them to come home with her as her parents would adopt all of them, they agree to go.  Peter flies them back to London where the lost boys are adopted, but Peter himself refuse to become part of the group as he does not want to grow up.

Wendy Makes Peter promise that he will come back for her every year to do his spring cleaning.  Peter does this for a little while but eventually forgets and it is years before Wendy sees him again.  One night while Wendy is sitting in the nursery Peter finally comes again, wanting Wendy to do his Spring cleaning.   Wendy, however, cannot go with him as she has grown up and sleeping in the little bed that used to be Wendy’s is Wendy’s own daughter Jane.  It is not long before Peter has convinced Jane to go with him and a new generation of become enraptured by the magic of Peter Pan.

Peter Pan would go on to be produced at various theaters throughout the years.  It was in the 1950s that the next great change happened for Peter Pan.  Jean Arthur a very talented movie actress took up the part.  Miss Arthur had starred opposite Jimmy Stewart in two of Frank Capra’s movies; Mr. Smith goes to Washington and You Can’t Take It With You.  This was supposed to be a full musical but was eventually cut back to a stage play with music.  The other notable fact in this version is that Boris Karloff would play the villain Captain Hook.  Mr. Karloff made his name in the original film version of Frankenstein.

In 1953 Disney Studios released the first animated Peter Pan.  This is the production that most people are familiar with.  Disney sanitized the story a little and took out any of the really frightening moments.  At the end you feel that story had more been a dream than a reality.

This version was not met with critical delight.  It struggled with the critics but not with the audiences and Miss Martin would Play Peter on an almost regular basis until a few years before she passed away.

Peter Pan as stage play would not very often be done as a non musical from that point forward and many actresses would go on to play Peter.  Mia Farrow, Sandy Duncan and most notably Cathy Rigby, Miss Rigby began her career as an Olympic Gymnast.  She would later become the first spokesperson on TV for a woman’s tampon product.

The best part of Peter Pan is when Peter and the Children take to the air.  In the straight productions the flying was pretty simple,  in the window of the nursery, to the mantle and, then out the nursery window.  In the first musical production the song I’m Flying was written and Miss Martin wanted to do an aerial ballet with the children.  This was choreographed and worked quite well.  In fact at the end of the play Miss Martin would fly off the stage, flying over the audience and sprinkling fairy dust on them, much to their delight.

When Cathy Rigby took the role she, being a gymnast was able to add a whole new element of movement to the ballet by doing flips and mid air somersaults.  She too would delight the audience by flying over them at the end of the play.

Peter’s journey is far from over.  There have been sequels as well as prequels to the story and many different film versions.  For some reason, deep down, and secretly, none of really wants to grow up.