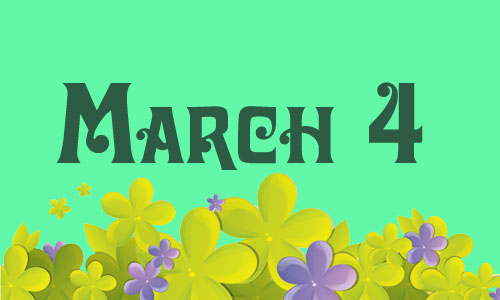 March 4 in Pop Culture History
1519 – Hernán Cortés arrived in Mexico in search of the Aztec civilization and its wealth.

1789 – The federal government under the US Constitution began, replacing the Articles of Confederation.

1826 – The first chartered railroad in the US was chartered as the Granite Railway in Quincy, Massachusetts.

1837 – The city of Chicago was incorporated.

1853 – Franklin Pierce was the first U.S. President to recite his inauguration address entirely from memory. The speech was 3,329 words long.

1930 – The Coolidge Dam on Gila River in Arizona was dedicated by President Calvin Coolidge.

1944 – Louis “Lepke” Buchalter, the head of Murder, Inc., was executed by electric chair at Sing Sing Prison in New York.

1966 – John Lennon was quoted as saying “Christianity will go, it will vanish and shrink… We’re more popular than Jesus now,” in reference to religion fading in the western world.

1975 – The first People’s Choice Awards was shown on CBS.

1975 – People magazine was published for the first time in the United States as People Weekly.

1982 – Police Squad! premiered on ABC, lasting 6 episodes, but the concept was made into several very successful “Naked Gun” feature films

2005 – The Pacifier debuted in theaters.