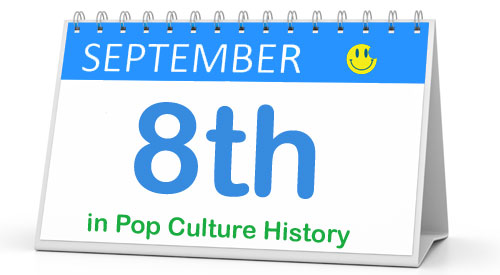 1504 – Michelangelo’s David was unveiled in Piazza della Signoria in Florence.

1888 – The body of Jack the Ripper’s second murder victim, Annie Chapman, was found in London.

1892 – The Pledge of Allegiance was first published by by the Youth’s Companion Magazine – “I pledge allegiance to my Flag and the Republic for which it stands, one nation, indivisible, with liberty and justice for all.”

1935 – US Senator from Louisiana, Huey Long was fatally shot in the Louisiana State Capitol building by Carl Austin Weiss, Jr.

1956 – Harry Belafonte’s album “Calypso” featuring The Banana Boat Song was the #1 album, according to Billboard, and stayed #1 for 31 weeks, become the first documented million-seller album.

1966 – Tarzan and Star Trek both debuted on NBC. That Girl debuted on ABC.

1974 – US President Gerald Ford pardoned former President Richard Nixon for any crimes that then-President Nixon may have committed while in office.

1975 – US Air Force Tech Sergeant Leonard Matlovich, a decorated veteran of the Vietnam War, appeared in his Air Force uniform on the cover of Time magazine with the headline “I Am A Homosexual”. He was given a general discharge, which was later upgraded to honorable.

1988 – Yellowstone National Park was closed due to ongoing summer fires.

2004 – The NASA unmanned spacecraft Genesis crash-landed on Mars when its parachute failed to open.