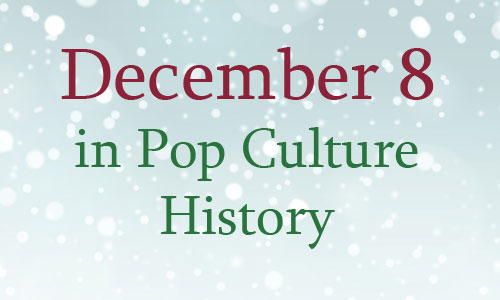 December 8 in Pop Culture History
1765 – Eli Whitney was born in Westboro, Massachusetts. Whitney invented the cotton gin and developed the concept of mass-production of interchangeable parts, which enabled the industrial revolution. He doesn’t get enough credit for that.

1854 – Pope Pius IX proclaimed that the Immaculate Conception, was Roman Catholic dogma, stating that Mary was conceived without ‘original sin.’

1941 – Over 81% of American households tuned in to FDR’s “a date which will live in infamy” speech.Almost everyone in the US congress voted to go to war with Japan. Montana’s Jeanette Rankin was the only person to vote against it.

1941 – The Chinese government announced that they would back the allies, the U.S., and Great Britain against Germany, Italy and Japan.

1952 – On the CBS show I Love Lucy, a pregnancy was acknowledged in a TV show for the first time, with the announcement that ‘Me and my husband are about to have a blessed event.’

1983 – England’s House of Lords voted in favor of allowing cameras to broadcast live television proceedings from its chamber.

1993 – The North American Free Trade Agreement (NAFTA) between Canada, Mexico and the United states, was signed into law by President Bill Clinton.

1987 – Frank Vitkovic entered the Melbourne Queen Street Post Office and opened fire on customers and staff with a sawed-off shotgun, killing eight before killing himself. One of the earliest instances of ‘going postal’ also happened in Australia in 1926.

1995 – The Grateful Dead announced they were breaking up after 30 years, a few months after the death of bandmate Jerry Garcia.

2004 – Blade: Trinity and Dungeons and Dragons debuted in theaters.