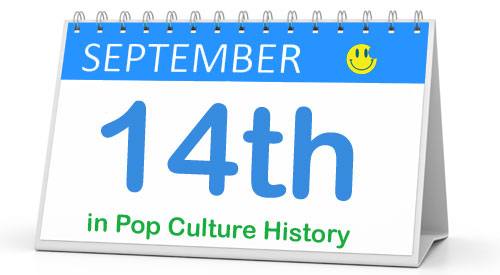 1752 – Yesterday was September 2nd, in Great Britain and the American Colonies, but with the switchover from the Julian to Gregorian calendar, it became September 14 in all of western civilization.

1965 – My Mother The Car debuted on NBC. It was the first universally panned “bad” TV show.

1977 – A tube top-clad woman named Yolanda Bowsley was called into Contestant’s Row on The Price is Right, and while running down her breast popped out of her shirt.

1984 – Bette Midler & Dan Aykroyd hosted the first VMAs (Video Music Awards) on MTV. Younger visitors may be interested to know that at one time, MTV was a 24-hour music video channel.s

1985 – The Golden Girls premiered on NBC

1985 – The Care Bears premiered, in syndication

1994 – MLB Acting commissioner Bud Selig announced the cancellation of the 1994 baseball season on the 34th day of a strike by players. Some say Baseball still hasn’t recovered from this lost season.